"Sir Paul," an esteemed title for one who makes a living from rock and roll. He does indeed exhibit knightly behavior in his campaign for awareness of human suffering as an advocate in the land mine issue. Other knightly qualities include bringing happiness to thousands of crazed Beattles fans at sold out arenas across the nation. Several generations of people are absolutely ecstatic about Paul's decision to include a heavy sampling of some of the Beattle's greatest tunes. Paul has not toured in such a long time, and his return to the stage is just in time to touch yet another generation of young impressionable minds. The first album I ever owned was "Band on The Run" by Paul McCartney's band The Wings. I was ten years old, it was a hand me down for my mother. God bless her taste in music, and kindness to share. I soon adopted the rest of her collection and wore out her copies of "Abbey Road," "Rubber Soul," "Revolver," and a Rod Stewart album that had a red cover. By the time I hit eleven these albums were all collecting dust. I had moved on, and my extensive collection of KISS albums were getting more play than the ones at the radio station. But, I always held a place in my heart for the Beattles. Years later as I tuned in, turned on, and graduated from high school. I found new highs with The Beattles as I discovered The White Album and Sgt. Peppers Lonely Hearts Club Band. Oh what joy!!

This evening was, for me, an event of tremendous proportion as songs I have enjoyed for a quarter of a century were performed live in concert right before my very eyes. To hear this many Beattle's songs in a Paul McCartney set is unheard of since the breakup of the highly controversial band of revolutionary sixties icons. The return to the U.S. for a second leg of this tour supporting McCartney's recent CD release "Driving Rain" was certainly as successful as the first leg. The ARCO arena was absolutely full to the hilt, just before the show a few seats on the floor were available for two hundred and fifty dollars apiece. A little expensive, but if you can afford it, the view up there would have been money well spent. Some obstructed view seats were to be had for fifty dollars, and I don't even think you could see Paul from there. Everybody was sitting down and I was amazed to see very few holes, the seats were all filled. The attention of a 17,000 plus crowd was completely gathered at the stage as people were mesmerized by the masterful performance of a brilliant songwriter. People were not concerned with socializing, or consuming alcohol, they were glued to their seats all eyes on the stage. The halls and concession stands were empty like a ghost town. The set list did not change at all from show to show. In fact, this list was copied from the laminated copies used by the sound and lighting technicians for the whole tour.

The crowd was quiet and attentive as if they were taking notes for a college final, wary not to miss a beat. A few avid fans were making up for lack of movement and noise from the rest of the crowd by singing every word and refusing to sit down, dancing against the grain so to speak. Three quarters of the crowd was quietly mouthing all the words even to the new songs from "Driving Rain." I managed to use amazing self control and did not join the dancing ones until my body was jolted upwards by the first chords of "Band on the Run." I did not stop dancing until security asked us to return to our seats. At some point later we just danced on the stairs, so as to not obstruct the view of others. Oh yeah, we got back up to dance for "Let It Be" and couldn't sit down for the rest of the show as it just got better from there. The show ended with "Hey Jude" and as the lame and tired left, we made our way down to the floor to get a little closer to rock and roll royalty. Somebody has to fill those empty seats. We got down towards the floor, and the bluecoats were still checking tickets to get on the floor. I flashed my photo pass real quick and prayed he would let me and the wife by, it worked. We found a spot in the back of the floor and enjoyed the six song encore from the expensive seats. Better sound, better view, things were really getting better all the time. Moving towards the sound booth, I suddenly lost my wife. Later, to find out that she had abandoned me to get a closer look at Paul as he was leaving the stage. She uttered not a word to her husband as she darted into the crowd, behold, the amazing power of a Beattle.

The show started a little late as the crowd was expected to be seated for the beginning of the performance, and everyone was late. The radio had been broadcasting to leave any bags, or backpacks in the car. The searches went quickly and the place was full up by 8:15 p.m. The lights dimmed just before 8:30 p.m. The show had no opening act, none that was a band anyway. A parade of dancers, performers, and stiltwalkers wound their way through the audience and up onto the stage. It was quite an unusual group, some in olde english attire, some with oriental motif costumes, a spanish dancer, a gargantuan strongman, bird masks, and simply a bizarre extrordinaire affair. The best was the man in the hat with the apple, he looked quite like a character from The Avengers, except for the apple dangling from his hat. The the whole thing had a Stanley Kubrick edge to it, and this became especially evident as they brought out the scantily clad contortionist inside the glass box. A multicultural extravaganza to say the least, and I dare say, it was a spectacle to marvel at. The performers skirted off to both sides as a silhoutte appeared on the giant cloth sheet, a man with a guitar. The ambient freakshow music crecendoed to a peak, and with a subtle drum roll, the screen lifted to reveal the maker of the silhouette. Paul strolled casually down from a platform and walked up to the middle of the stage.  The audience jumped up for a moment and just as quick were back in their seats again as Paul went right into "Hello, Good-bye." 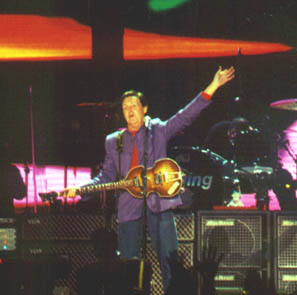 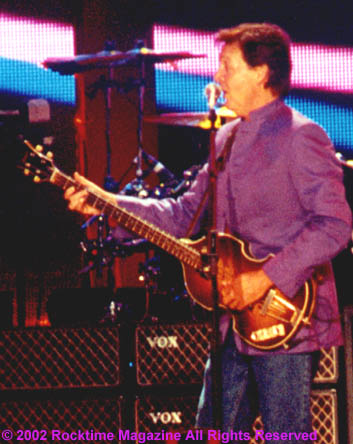 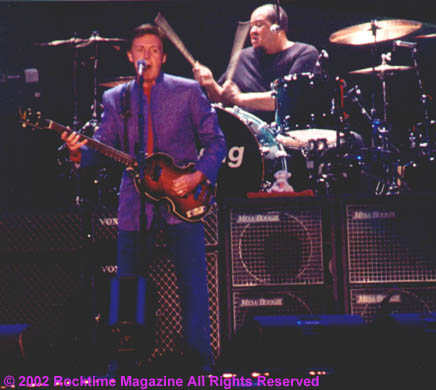