The Cove is a great new place designated for concerts and events inside CAL EXPO. There is a waterway between the stage and the audience, which is pretty cool. The water flows all around the venue and makes it a beautiful place to see a show. You probably won't do any rail hopping or stage diving here, especially with the onset of fall weather here in northern California. If people rush the stage at this venue, the front rail will go right over and folks will assuredly fall right in the water. Sheryl Crow and Michelle Branch were the talk of the town this week as their tour rolled through Sacramento last weekend. A happy crowd was treated to some great music from a fantastic new artist as Michelle Branch opened the show with most of the chairs already full. When she played her hit song "Everywhere," the glue on the crowd's seats was suddenly dissolved. I always think it must be somewhat disconcerting for a musician to have a considerable body of work they perform for an audience, yet, they only get a response from the popular songs heard on the radio. Truly a heartfelt and solid performance. Her tunes all had musical depth and revealed strong emotion. She and her band also slipped a fantastic version of "Angel from Montgomery" into the set list. They certainly kept me from sitting down, her future is going up, up, and away.

Rock and Roll baby! This tour is over the top folks. The last time I saw Sheryl perform it was a little subdued compared to last sunday night's show at the  Cove. She came out wearing these designer leather jeans that were red, white, and blue with white stars up and down the red stripes. Also, she had this huge red, white, and blue rhinestone Texas belt buckle that reflected the stage lights shooting occasional patriotic glimmers into the crowd. The show was really good right off the bat, andd- I was blown away by the end, but we'll get to that. Let's start at the beginning. Sheryl opened the show with the first song on her latest release which just came out on A & M/Interscope records. The song is great, "Steve McQueen," it  just emanates cool as does Sheryl when she sings it. People were all sitting down for this song, I guess they all got glued-ass syndrome again. A few people braved the inevitable glaring eyes and yells of "get down" from behind and stood up to dance for "Everyday Is A Winding Road." A few more got up as Michelle Branch came out to accompany Sheryl by singing some of the lines from "My Favorite Mistake."

Sheryl Crow, just in case you didn't know is a multi-faceted and accomplished musician. She played the bass guitar as her band mates played lead and rhythm guitars for "My Favorite Mistake." My point is that when you see her in concert she plays all the instruments except the drums, and I imagine she has that ability also. When Michelle Branch was on stage you could see an amazing amount of respect and admiration glowing in her eyes as she looked over at Sheryl. "C'mon, C'mon" and "You're an Original" were next and found everybody back in their chairs. Time to get out there and buy the new album folks, it rocks.  This music makes you move, so get up and dance , you only live once.  It is a real treat is to hear the new music "live" and Sheryl is playing plenty of the songs from the new release. The songs on this new album have that same patented carefree Sheryl Crow blue sky style. Not to mention those shocking off the wall lyrics that make her so revered in the world of rock and roll. Stevie Nicks, Don Henley, Benmont Tench, and Lenny Kravitz  are all included on the album credits.

Now back to the hits as the band delivered stellar background music for Sheryl's five star vocal talents during "Anything but Down." Next, Sheryl started talking about a casino and having all the money in the world and I knew we were "Leaving Las Vegas." The band played it different and slow and the intro on the pitfalls and windfalls of Vegas life was entertaining. A definite hit and crowd pleaser was next, as Sheryl sung are you "Strong Enough" to be my man. Friend and co-author of many of Sheryl's songs came out to play guitar for "If It Makes You Happy." This was the only show on the tour where Jeff Trott came out on stage to play. The Sacramento audience got the last show of the tour kick down as good friends were going to be parting ways. Sheryl introduced the next song as a new song "Abilene." The show really started to smoke after that as she grabbed her acoustic guitar and started strumming chords. The band went all the way back to the self titled 1996 album and did "A Change (Would Do You Good)." I'm not sure if they did this at any of the other shows on the tour, but we got a surprise short version of The Who's "I Can't Explain" complete with words and all. It was not on the band's set list and I think it happened very impromptu.

The next song they played is right up there in the crowning achievements category, as Sheryl belted out "The Difficult Kind" from The Globe Sessions. This song has all the trademarks of a Sippie Wallace blues heartwrencher, and Sheryl's voice sounded just like an angel. I personally feel this is the only song the audience should have sat down for all night. She came out to front center stage with her acoustic and all the stage lights went black, except for a dim one on her. She started playing the guitar and the crowd went silent as she quietly began to sing. A red rose came up on the screen behind her and smiles went wide across the faces in the audience. Her voice, an instrument of it's own; subtle, yet powerful like a locomotive when it gets going. When she went into the chorus, the band came in behind her and the stage lights came up slow for maximum effect. Her voice opened up and went into full bloom just as the red rose on the screen unfurled its petals. This was the highlight of the show for me, except for the unreal and totally unexpected encore. Sheryl started "Weather Channel," then halted it and said, "Hold it, hold it, we can do better than that." They started it over and it went over fine the second time.

The crowd went nuts and kicked up their heels for the much awaited "All I Wanna do." Nobody sat down for the rest of the show! The video screen was showing silent movies and flashing different captions, some that were lyrics from the song. The crowd was dancing wildly for "Soak Up The Sun," and the set ended with "There Goes the Neighborhood." Just before the last song, about a third of the audience headed out and I remember thinking that it was rude for them to leave before the end of the performance. The encore was still coming as the "lamos" left and the "die hards" moved past the ticket checkers into the front. It's nice when the venue staff release their relentless grip on the good seats at the end of a show and let those less fortunate upgrade their seats. We moved right up to tenth row dead center as the roadies rolled the Yamaha grand piano out to center stage. I am so glad we did, because Sheryl was just about to break out the super kick down of the night. She encored with "Safe and Sound" a beautiful ballad type tune that she  played eloquently on the piano. This makes a total of seven out of thirteen of the songs from the new album "C'mon, C'mon" that Sheryl and her band had played. That's awesome! The new songs are killer and I think the fans were pleased to hear so many. The show was not over though as Sheryl got up from her seat at the piano and the band went into Led Zeppelin's "Rock and Roll." This was incredible, I have not been surprised like that at a show in awhile. The timing was perfect as Sheryl grabbed the microphone and jumped on top of the piano and just started wailing, "It's been a long time since a rock and roll, It's been a long time since I got that stoned." The band pulled out all the bells and whistles for this song. People were mostly caught unawares, but the Zeppelin fans heard the call of the wild and went ballistic as Sheryl gave life to a song that epitomizes rock music. This tour is over, but Sheryl is opening for the Stones on their coming tour. Long live rock! What time is it? It's Rocktime!!! Thanks for reading and we'll see ya the shows.
NICK RUNNING 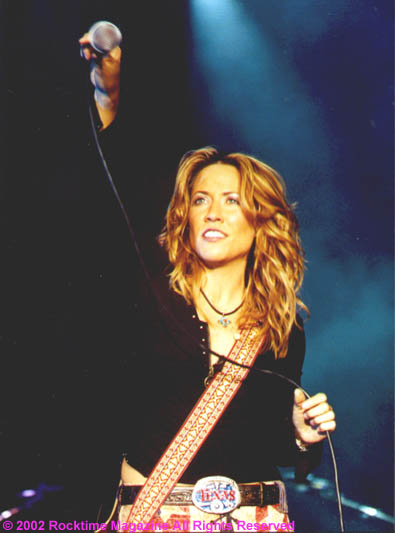 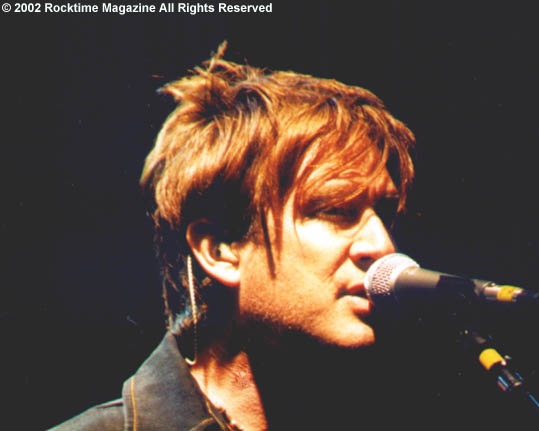 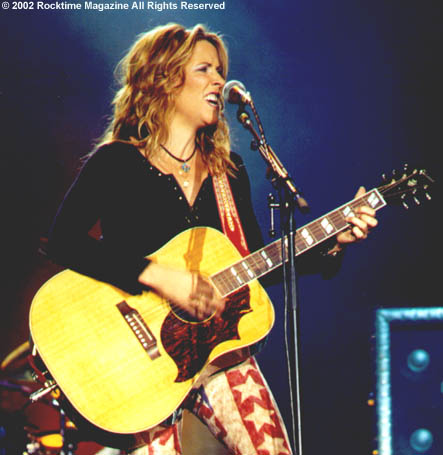 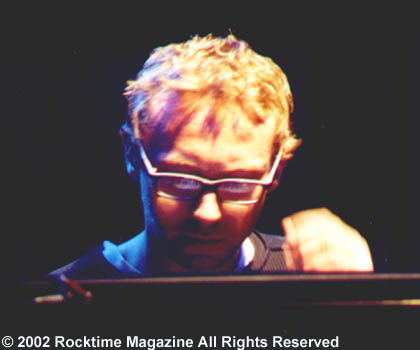 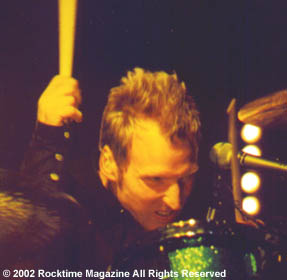 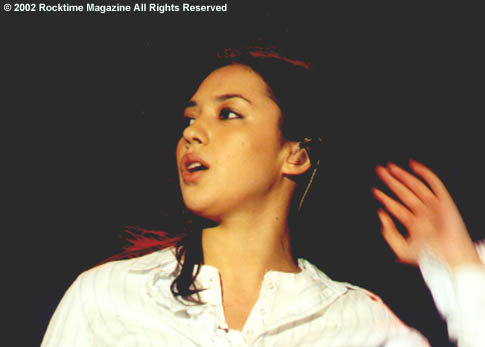